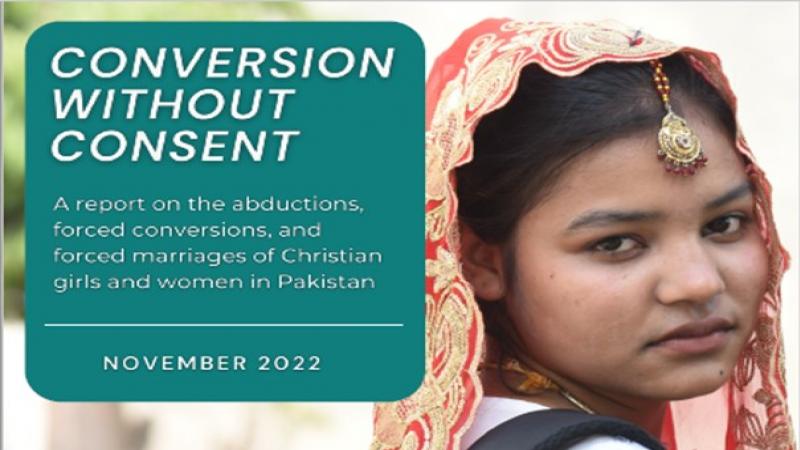 On international human rights day, Voice for Justice in collaboration with Jubilee Campaign launched a report titled “Conversion without Consent” that examined a total of 100 reported cases involving abductions, forced faith conversions, forced and child marriage of girls and women belonging to the Christian community across Pakistan between January 2019 and October 2022. The year 2021 recorded 42 cases (42%) and exhibited an increase in the number of cases formally reported in 2019 (27 cases; 27%), 2020 (12 cases; 12%), and between January and October 2022 (19 cases; 19%). The data shows that the highest number of total cases 86% were reported in Punjab province alone, followed by 11% in Sindh, 2% in Islamabad, and 1% in Khyber Pakhtunkhwa, whereas no case was reported in Balochistan.
In a statement, the chairperson of Voice for Justice, Joseph Jansen said that it is common to exploit a position of power to entice marginalized people to convert, which amounts to coercion. The right to religious freedom does not protect against “improper proselytism”, such as the offering of material or social advantage or the application of improper pressure with a view to gaining new adherents, which urgently requires comprehensive legislation to safeguard vulnerable citizens.
He lamented that the offense of sexual violence against minor minority girls goes unchecked under the guise of faith conversion and marriage. He observed that forced conversions are linked with the state’s abject failure to implement and enforce existing laws which aim to stymie abduction, child marriage, and forced marriage, especially where the victims are from religious minority communities. He added that the government must not leave the complaints of forced faith conversions unaddressed, instead, it needs to make progress by introducing a law to criminalize the forced conversions in conformity with human rights standards particularly religious freedom, capitalizing on the progressive judgments issued by high courts in Pakistan dealing with child marriage and forced conversions, and the progressive draft bill introduced by the parliamentary committee.
The executive director of the Jubilee Campaign, Annigje Buwalda said that the report presents an analysis and findings about the confluence of intersecting vulnerabilities of minority girls and their families, exploitable legal loopholes, and irreconcilable court verdicts that make it so difficult for susceptible faith minority communities to protect themselves and seek justice against the atrocity of kidnapping and child marriage. She added that the report will serve as a vital tool to further galvanize action to eradicate forced conversions and child marriages in Pakistan and advance children's rights.
The report “Conversion without Consent” included the notable cases of underage girls particularly; Zarvia Parvaiz, Saba Nadeem, Chashman Kanwal, and Sunaina James who became victims of forced faith conversions. The report highlighted the statement Zarvia Parvaiz recorded before the court after she was rescued from the captivity of perpetrators which reads “she was heavily drugged, raped, beaten with a stick, burnt with cigarettes, and electrocuted. Similarly, Saba Nadeem testified that “she was abducted and raped, and the perpetrator took her thumb impression on the certificate of marriage and conversion against her free will and consent and threatened her with dire consequences if she revealed the assault to anyone.” The stories of suffering are a testament to the inhumane treatment to which abducted girls and women from minority communities are subjected, however, unfortunately, the perpetrators are not effectively prosecuted and punished. Abduction, forced conversion, and child marriage are just the tip of the iceberg of the many multi-dimensional human rights violations committed upon these victims.
The report shows that 61% of girls were targeted before reaching 16 years of age, while 18% of girls became victims between the ages of 16 and 18 years, and 14% became victims above 18 years of age; the ages of 7% of victims were not ascertained. The data reveals that 67% of the cases were reported in the five districts alone, which include; Lahore, Faisalabad, Gujranwala, and Sheikhupura from Punjab Province, and Karachi from Sindh Province which exhibit a high rate of cases of underage minority girls. The report reveals that the majority of the girl victims of forced faith conversions and child marriage are minors, however, the fabricated age of all victims is deliberately altered to 18 years or above by perpetrators on certificates of marriage to avoid criminal conviction under the Child Marriage Restraint Act 1929 according to which marriage to an underage child is illegal and punishable by imprisonment. All minor girls are presented as adults and economically independent, and their marriages are executed in the absence of a lawyer or consent of a legal guardian (parents).
The report concludes that child brides have a greater likelihood of school dropout, health-related complications, lower labour force participation and earnings, and little decision-making power within the family. The abduction of schoolgirls hinders their access to opportunities such as education, skill development, and employment, all of which are essential for leading a dignified and self-sufficient life. The report recommends that affirmative action must be taken for the protection, promotion, and fulfillment of minority rights, particularly in the context of reforming the existing civil and criminal justice system to render it more sensitive to the needs of victims of forced conversions and their families. Moreover, the authorities must ensure that the observance of a state religion neither impairs the enjoyment of any human rights or any minority religion, nor results in discrimination in law, policy, and jurisprudence against those who profess a faith or set of beliefs contrary to the majority religion.
Read full report: https://www.jubileecampaign.online/_files/ugd/5fb138_029d0db38d004770a9d7d1d389d13b48.pdf