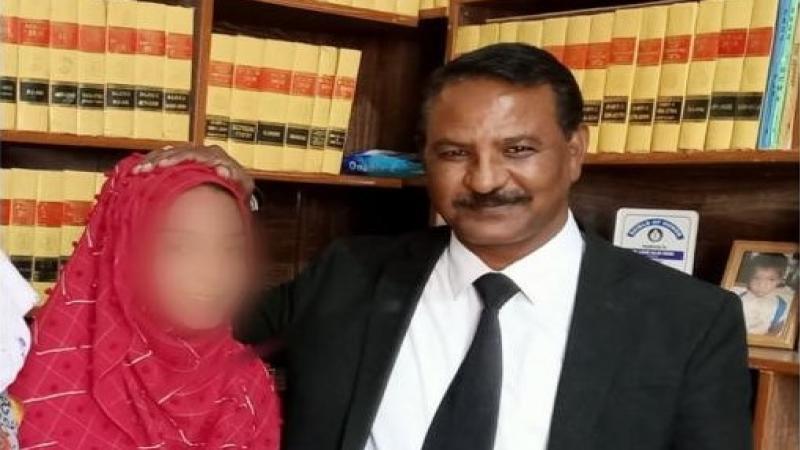 A young Christian girl, Anita Emmanuel,17, of Christian Colony, Bahawalpur escaped from her kidnapper after a year and was reunited with her family.
Anita was a student of year 10 at government secondary school Yazmaan, Bahawalpur. As both parents work, they had an arrangement with the rickshaw driver Muhammad Wasim to drop and pick her up from school.
Everything was fine in the beginning but slowly Wasim started getting friendly with her. It was normal for young Anita and she didn’t know the consequences of being friendly with the rickshaw driver.
Since she was travelling alone every day Wasim started taking advantage of this situation and started pushing and forcing her into a relationship.
According to Anita, she told him off several times but he continued forcing her to have a relationship with him.
Anita was confused about whether or not to tell her parents about Wasim’s behaviour, she didn’t know how her parents would react.
While Anita was still confused about whether she should tell her parents, on August 31, 2021, Wasim kidnapped her and took her to another town, Liaquatpur, Rahim Yar Khan district.
According to Anita,  that was not their daily route and asked where he was taking her. He did not reply but continued driving.
She said: “When I tried to shout, he stopped the rikshaw and told me not to ‘create a scene, otherwise I’ll kill you’.
“I was scared and kept silent as I had no option”.
“I was kept locked inside a room where he repeatedly sexually abused me.
“When I fought back he left me to starve. There were days when they didn’t even give me any water to drink,” Anita claimed, adding that it was months later when she gathered the courage to flee and reunite with her family.
“I couldn’t sleep for many nights as I did not know what would happen to me.
“One day some people came, and Wasim forced me to sign some documents and told me that I was now a Muslim and married to him.
“It was shocking for me but I was alone and not able to do anything apart from just following their instructions.
“After months I found an opportunity and escaped his detention and reached my parent's house. My parents were happy to see me alive and the whole family was crying.
Emmanuel Masih, Anita’s father, said: “When Anita didn’t come home until late that day we got worried, we went to her school and there was nobody apart from the security guard.
“When I asked him if he knew anything about my daughter Anita, he told me that she had left with her rikshaw diver as usual.
“I phoned Wasim, but there was no answer. We went to the Baghdad ADA Aljadeed police station, Bahawalpur and told the police about my missing daughter, requested that they help us find her, and also provided the details of Wasim but they didn’t pay any attention and told me ‘wait a bit more for her, she might be with her any friend and if she still doesn’t come by tomorrow, then come and we will see what can we do.
“The whole night my family and I couldn’t sleep I was continuously thinking about my daughter and praying for her safety.
“The next morning, I went to the police station and requested again that the police officer register a first information report (FIR) against Wasim, and recover my daughter from him.
“But instead, he wrote a complaint and said ‘don’t worry we will try to find her and if we find her, we will let you know.
“There was no action for a few days and I was disappointed. One day Wasim came to my home and started threatening me with dire consequences to withdraw my complaint against him. He told me that he has married Anita and she has converted to Islam.
“‘If you want to see Anita again withdraw your application otherwise you will never see your daughter again’, he said.”
Masih told us “One day all of sudden Anita arrived home, her condition was weary she was looking frightened and kept crying.
“Her mother and I also started crying but we were very happy to see her alive. She told us the whole story of how she was kidnapped and now how she escaped from Wassim’s captivity.
“When Anita was back, Wasim was already threatening us, so I decided to move to another town for the safety of Anita and my family.
“We moved to the Islamic colony, Bahawalpur and contacted the lawyer, Lazar Allah Rakha for help.”
Christian lawyer, Lazar Allah Rakha told us he met Anita, and she is a very innocent girl, she was kidnapped, forcibly converted to Islam and then Wasim married her against her will.
He said he had filed a petition under section 22a Penal Code in the Family court of Bahawalpur for the jactitation of her marriage with Muhammad Waseem
He further said they have also requested the court for the protection of family and the Anita.
Rakha said: “I hope that Wasim will be dealt with in accordance with the law and he will be punished for kidnapping Anita and marrying her forcefully. The case is ongoing.