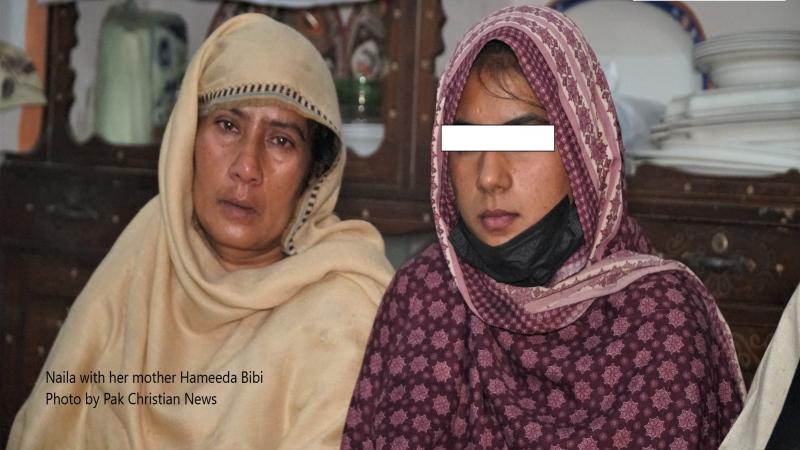 A young Christian girl, Naila, 14, escaped her captors while they were taking her to another city.
They intended to convert her to Islam and then marry her to a Muslim, who was already married and recently released from jail.
Naila is a class 7 student, but because her school is closed due to COVID-19, she is studying at home. Her father Javed Masih and Mother Hameeda Bibi, both are illiterate and work as janitors in a nearby factory in Sialkot.
Speaking to Pak Christian News (PCN) Javed Masih said he has three children, - one daughter and two sons and Naila is in the middle child.
Masih said that on September 28th he and his wife were both at work when his son came to their work and said that someone had kidnapped Naila.
He said, I was very disturbed, I took time off from work, I went home, and I decided to ask the police to help me to find my daughter. We went to the Mutra police station. The police registered our report, but before they took any action before midnight, Naila had returned after courageously fleeing her captors.
Masih said: “Although Naila is back and I am very proud of my daughter, unfortunately, our ordeal is not over yet, as the kidnappers are threatening to kill us if we don’t withdraw the case against them. Presently, I am hiding with my family for their safety and I do not know how long it will continue.
Describing Naila's ordeal, Masih said that she was kidnapped by her Muslim friend Sidra, her brother Shakeel and some of their relatives. They kidnapped her when she went to the shop to buy breakfast for her brothers. After kidnapping her they took her to a clerk who told her to recite Kalama because he was told she was willing to convert to Islam before marrying Shakeel. She said no and told the clerk that she was a Christian and that she was not converting to Islam at any cost.
She told him: “These people have kidnapped me, and I am not marrying anyone.”
After refusing to recite the Kalama and signing the document, she was beaten and threatened with death.
Masih said: "I am deeply grateful to God that she is faithful to her Christian faith."
After using all the tactics and pressure when Naila said no, they decided to take her to another town, Rawalpindi, but at Lala Mousa using her instincts, she managed to escape her kidnappers. She told them that she needed to use the bathroom, and they allowed it, but there was a big religious procession where Naila told people she had been kidnapped.
Masih said: One person called us and after listening to me, they said don't worry, we are sending Naila home, and you can pick her up at the bus station. They even bought her a ticket and I am very grateful because it is only because of them that I have my daughter with me."
Amir Waqar, a local Christian journalist who helps the family, said that Naila is a very courageous daughter of whom we are very proud. I am very happy that she used her instinct smartly and managed to escape her captors, this happens very rarely.
He said that this is a very serious problem and that, unfortunately, abductions and forced conversions are on the rise in Pakistan, but the government is not taking this seriously. Recently, the Parliamentary Committee for the Protection of Minorities against Forced Conversions rejected the Bill on Forced conversion. As a result, Christians and other religious minorities are discouraged and there is little hope.
Chairman Masihi Tehreek-e-Baidari, Dr. Emmanuel Adil Ghauri, who also helps the family, said that we help the family and because of our efforts and prayers, Dr. Muhammad Mumtaz Hunjra, Judge Sessions Court Daska has cancelled the bail of the abductors.
Ghauri added that the kidnappers continue to threaten the family, but since local police officers were not listening to them and instead siding with the kidnappers, they have approached the highest levels of the police and hope that the captors will soon be behind bars.