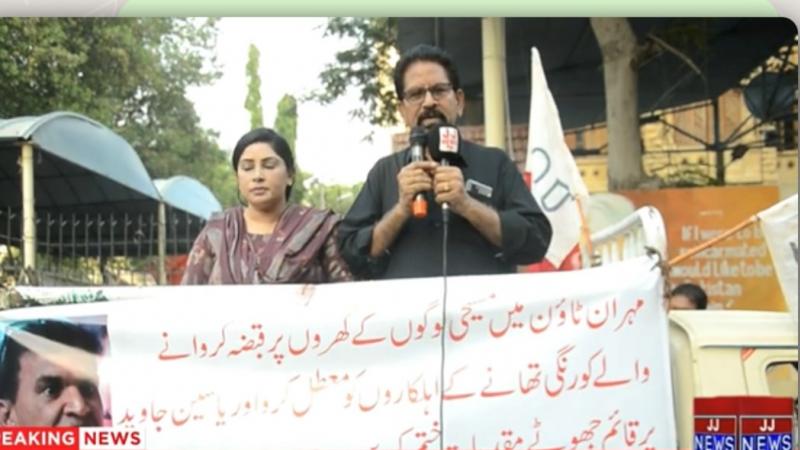 On 8th November 2021 Philip Sajjan of Mehran Town, Karachi said in a video message that residents in the area are in danger because the land mafia and Sharifabad Korangi industrial area police station are after their land and forcefully evicting them from their homes.
He said the police continues to register cases against the residents and threaten them to move elsewhere or face court cases against them.
In his message, he is asking the authorities to save them from being homeless and stop the land mafia from perpetrating torture and registering cases against them.
Sajjan’s sister Sobia (not real name) told Pak Christian News (PCN) the police and the land mafia are using all their power and tactics to take over the property, normally raiding the houses at night, arresting the men who are beaten by the police until they agree to hand over their land.
She said: “last night the police knocked at our door, I asked my brother not to come out, let me deal with them, but as soon as I stepped out they started abusing and attacking me.
“This whole scene forced my brother Sajjan to come out from hiding. As soon as he came out, they caught him and forcibly pushed him into a police van. We started shouting and crying, when other people heard our shouts, they came to help us. When police and the landgrabbers saw other people coming to our help, they left us, saying that we will have to pay a heavy price for creating a scene.
Gasper Daniel a social activist and analyst told that on 30 October Muhammad Sajid and Muhammad Afzal, the land grabbers had registered a case against Sajjan.
The FIR states that Sajjan had illegally occupied his property when on 2nd April 2016 they went to Punjab to attend a funeral and in their absence, Sajjan and his family illegally took possession of their property. In that FIR they have nominated several unidentified individuals involved in this alleged illegal possession.
The police have arrested Sajjan and his family members, who are being tortured by the police and are facing court cases.
Daniel also said the land mafia group is headed by Muhammad Sajid and Muhammad Afzal and they have almost 400 fake files on different properties belonging to Christian families of Mehran Town.
Shabir Shafqat, a member of the National Christian Party, told PCN: “When we sent one of our members, Yaseen Javeed, to talk to the police, he was arrested too without any complaint against him. This was outrageous, and Yaseen is released now.”
According to Shafqat land mafia members involve innocent Christians in fake cases to threaten them so they agree to sell their houses at a much lower price than the market value.  He said they bought a church plot for just Pak Rs. 1.5 million from a pastor while the actual value of the plot was Rs. 2, 000,000.
Shafqat further said the land mafia is very strong in Mehran town, Sajjan raised his voice against them and now he and his family are paying a price for this.
He added: “The police are siding with land mafia therefore there is not much hope for justice and if authorities do not interfere we all may lose our homes.
“It is a sad reality but there is nothing much we can do, especially when authorities are not paying any attention and the police who should stop the land mafia are siding with them.
“We are only facing this because we are Christian and nobody cares about us, unfortunately being Christian we are considered lesser citizens of the country and not equal citizens of this country.”