Cross removed from Church in Pakistan during the dedication. 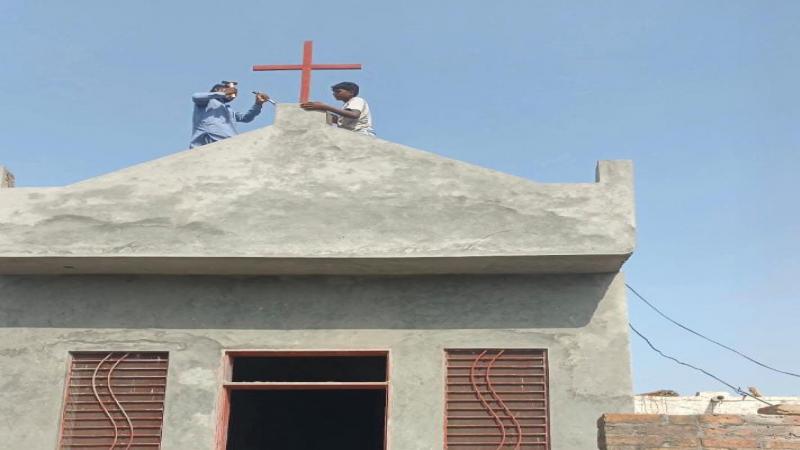 On Sunday, August 29th, a Muslim mob forcibly stopped Christians of Tibba Sultan, Vehari, from attending the inauguration ceremony of a newly constructed church.
The mob gathered around and asked them to remove the cross from the Nazreen Church rooftop, threatening to remove it themselves. To avoid any bloodshed, the Christians of the area called the police, but it was all in vain and they were left with no choice but to remove the cross from the rooftop of the church.
According to Baber Shaukat a social activist, when the Christians were preparing for Sunday service, a Muslim mob gathered around the church and told the congregation they could not use this church for worship anymore.
Members of the congregation called the police helpline number because the students from the nearby Madrassah (Muslim Seminary) had started joining the mob. It was a big group of around 300 to 400 people who were infuriated and insisting on the removal of the cross from the church and for the front elevation of the Church to resemble a normal house.
The inspector at the police station told the Christians they had not informed him of the church’s construction earlier and suggested they remove the cross from the church for the time being, and they could try and reach a resolution later.
However, the cross was removed and  Pastor Rafaqat Yaqoob, lead the service in this newly constructed Church.
The land for the church was bought by the congregation’s own contribution from a brick kiln owner Mahar Yaseen whose wife likes the Christian people, while the church of Nazreen supported the construction of the Church.
Shaukat further said it is a Muslim dominated area and only a few Christian families are living around this church. He said that Imam Qaiser Sheikh and Allah Rakha, a labourer at the brick kiln were involved in causing the unrest. No FIR has been registered until now.