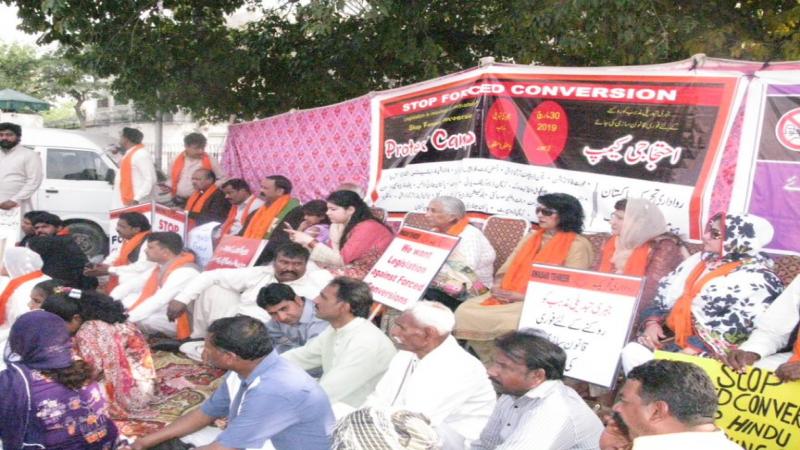 A Christian girl, Princey Masih, aged 14, from Haripur, has been recovered by the police and a court has sent her to a shelter home.

According to her mother Noreen Masih, Princey is a student of 9th grade and has been missing since August 3.

She had reported her daughter missing to the police and also released a video message with her husband, Francis Masih, about Princey’s disappearance.

According to Noreen two years ago a Muslim boy, Zulqurnain Zulqarnain, use to follow Princey when she was only 12 years old. He was studying in a college near Princey’s school and he used to follow her on her way to school.

He had kidnapped the teenager but on that occasion, her parents were able to recover her within 13 hours with the help of police and an influential person Akhter Shah. Zulqarnain also signed an agreement, which he consistently breached.   Zulqarnain was in touch with Princey and kept encouraging her to marry him.

Noreen has accused Zulqarnain’s family and said that Zulqarnain’s father Iqbal used to arranged meetings between Princey and his son and he kept on convincing her daughter to marry him.

Noreen said Zulqarnain’s family knows where her daughter is and are refusing to say where they are hiding her.

Once again Noreen went to Akhter Shah and said Zulqarnain had kidnapped Princey, but this time he refused to help, told her to wait 4-5 days and she would be back.

Noreen said: “Several days have passed but nobody is helping us.  My daughter is innocent, and she doesn’t know anything.”

She claimed that her daughter wasn’t eligible for marriage as the Nadra registration certificate showed that she was born on Jan 10, 2007, and her age was 14-years-old.

She further said: “We have complained to the police but they are not registering the first information report (FIR) against Zulqarnain and his family.

“Instead the police suggested arranging Jirga ( a traditional assembly of leaders to make decisions by consensus and according to the teachings of Pashtunwali).”

But Noreen insisted they did not know about Jirga but they needed their daughter back and the kidnapper should be arrested and punished. She said they kept her daughter for six days, raped her and to cover their crime are showing a marriage certificate. She requested the prime minister and all the high officials to help recover her daughter from the abductors.

Noreen also alleged that a local resident had kidnapped her daughter and that the son of a local PTI leader had been implicated in the abduction. She insisted that the leader of the PTI had promised to help her in the early return of her daughter, but failed to keep the promise.

Noreen said she contacted the head of the PTI again, who threatened her and her family and pressured her into a compromise.

In a response SHO, senior police officer Shafiqur Rehman said the police formally received an application after six days of this ‘kidnapping’ incident also the complaint has not directly named anyone involved in the kidnapping.

The police officer further said that preliminary investigations showed the girl had court marriage in Swabi after converting to Islam of her own free will, but he hadn’t received any documents for it.

On 13 August the police produced Princey in the local court. She told the court she had converted to Islam of her own free will before marrying Zulqarnain in a Swabi court without any coercion and she wanted to live with her husband.

The Magistrate sent her to the Darul Aman (shelter home) while her alleged kidnapper, Zulqarnain and his father  Iqbal were sent to jail on remand.