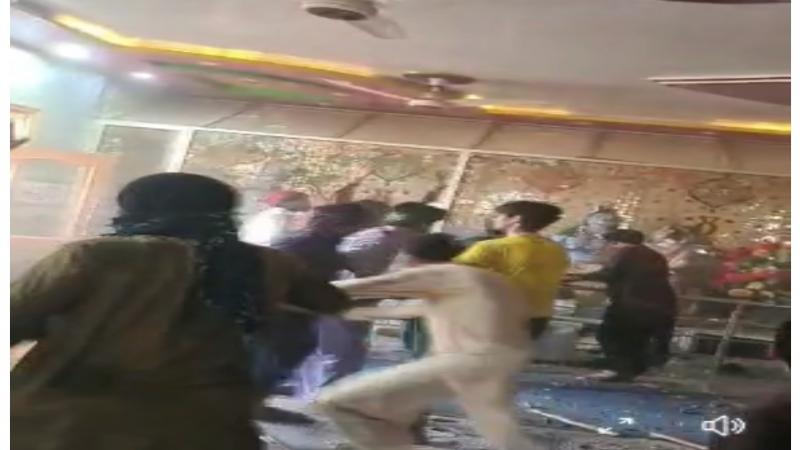 The National Assembly has passed a resolution condemning the attack on a Hindu temple in Punjab's Rahim Yar Khan district.
A mob of hundreds of people vandalised the temple and block the Sukkur-Multan Motorway.
It came after a local court granted bail to a nine-year-old Hindu boy who was accused of urinating in a local seminary.
The unanimous resolution was moved today by Minister of State for Parliamentary Affairs Ali Mohammad Khan.
He said the house strongly condemned the attack on the temple, with the resolution saying that Prime Minister Imran Khan had also condemned the incident.
The minister also said the government had always condemned such incidents and stood with minorities.
According to reports, the Ministry of Human Rights has been in contact with Rahim Yar Khan police, a first information report has already been registered and the suspects are being arrested.
Nasir Saeed, Director CLAAS-UK, condemned the ransacking of the Hindu temple and said this is a very unfortunate situation.
He said: “Since the promulgation of the blasphemy laws in Pakistan, these oppressive and frequently misused provisions have been used as tools of revenge in personal conflicts, to target religious minorities and to oppress political opponents or critical voices, putting in jeopardy the lives of the accused and also their families, members of their communities, judges, lawyers and everyone that tries to seek justice.
“The situation in Pakistan continues to deteriorate as the government has enforced blasphemy laws but failed to introduce safeguards and to protect religious minorities.
He further said this is not the first time that a place of worship of minorities has been ransacked. Mr Saeed said: “In the past, we have seen attacks and the desecration of churches, temples, Gurdwaras and Ahmadiyya mosques and no one has been punished for their crimes.
“Such actions from the government encourage the perpetrators and they continue to commit crimes with impunity.
“Recently we have seen how several Christian nurses were accused of committing blasphemy without any concrete evidence. They lost their jobs, were beaten and even their lives were threatened but those who attacked  their lives were asked no questions but considered heroes of Islam.”
He added: “The Government must pay attention to the exacerbating existing religious divides and growing climate of religious intolerance, violence and discrimination against vulnerable minority groups in the country, including Shias, Ahmadis, Hindus and Christians.
“The Government must introduce safeguards to stop the ongoing misuse of the blasphemy against religious minorities.”