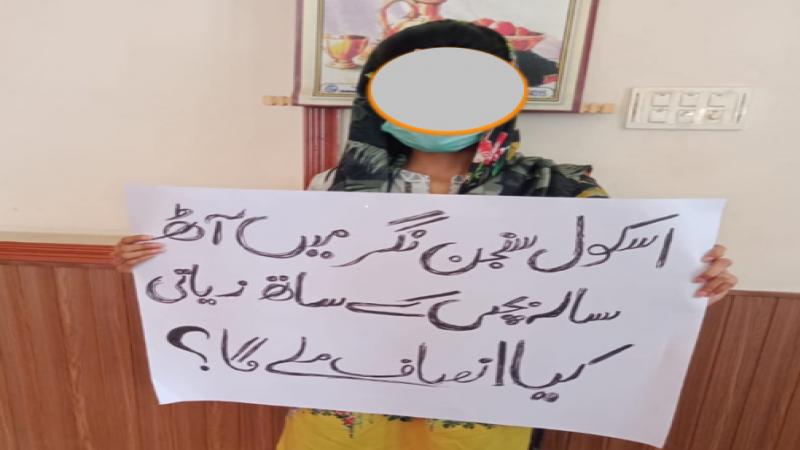 A Christian student of third grade, Suzaina (spellings shared by her mother) was raped at her school in Asif Town No.1 Lahore.
Her father Shahzad Mukhtar, who works as a ward boy in the general hospital, Lahore, said on June 22 his daughter went to the SunJan Nagar School, Basic Education Trust, as usual, but when she got home, she was quiet, scared and looked like someone else.
Mukhtar says he tried to cheer her up, but she fell asleep early and didn't even bother to play with her younger sister. The next morning, she told her mother, Rahat, what happened to her at school. It was shocking for Rahat to listen and she nearly fainted.
Mukhtar said: “We failed to understand how anybody could do such a thing with such a young girl. They have to be some kind of animal that actually hates kids.
“My wife and I both decided to go to the school and talk to her teacher and headteacher but when we asked about it, they denied that anything like this ever happened to my daughter.
It seems to me that they were aware of the incident, but they denied it for whatever reason. They even threatened to throw Suzaina out of school if I talked to someone else about it."
He added that it was very disappointing as the school administration was not willing to cooperate with them and investigate internally but instead it was saying no such thing had happened and telling the family to believe them and end the matter forever.
Mukhtar said he had no options and discussed the issue within the family (wife and his father) and decided to report this case to the police.
He went to the Nishtar police station on Ferozepur Road, Lahore and reported the incident to the senior police inspector (SHO) and requested him to register a first information report (FIR) against the perpetrators and arrest them at the earliest opportunity. The SHO assured him that everyone involved would be brought to justice.
Mukhtar claimed that teachers Tehmina and her colleague Farzana both knew what had happened but were trying to save the rapist.
He further said it was only happening because they are poor and Christian and are mistreated in every walk of life because of their Christian faith.
Until now no arrests have been made, but the police had called two female teachers but sent them back after questioning.
Mukhtar said: “We are being pressured to compromise and forget about everything. My wife, my father and I all have refused to reconcile with the criminals and compromise on this issue.
“We are not taking help from anyone but have hired a private lawyer for our daughter to get her justice and regardless of the price, I will do everything in my power for my daughter."
He added that they have learned that this is not the first incident of this kind, but at least three cases have already happened in this school. Some people are even accusing the management of making porn films of children and selling them abroad.
"But we have no evidence of this, and these stories scare us even more. This is a very serious matter, and it needs to be investigated by the higher police officer," Mukhtar said.
He continued: “People continue to visit us to offer their help and appease us, but they don’t know they are making our lives more difficult.
I find it very troubling to relive the same story every day. After this incident, I'm not going to work at Lahore General Hospital because people are looking at me strangely.
Instead of supporting us and giving us some courage, they are disheartening us and making up false stories about us. One day, while I was away from home, I was told that Suzaina was dead. I immediately hurried to the house and was relieved when I saw my daughter alive.
“Also, instead of cooperating with us Sunjan Nagar Basic Education Trust School management (where Suzaina was a student) is spreading rumours that the family created all this drama simply because we want to go overseas and want to use this story to strengthen our asylum case, while we have no such intentions.”
Mukhtar said they did not accept support from any NGOs, his father is handling the case, and they do not want to highlight it, but to keep it as low profile as possible.
We want justice, and that's all we want. However, the police are continually threatening us and forcing us to take money, withdraw our case and close the case. But I want justice not only for my own daughter for the other children as well," said the father.
When asked what they would do if the police did not arrest anyone, he said they would look for other options such as public demonstrations and so on.
In the end, he asked everyone to keep the family in their daily prayers.