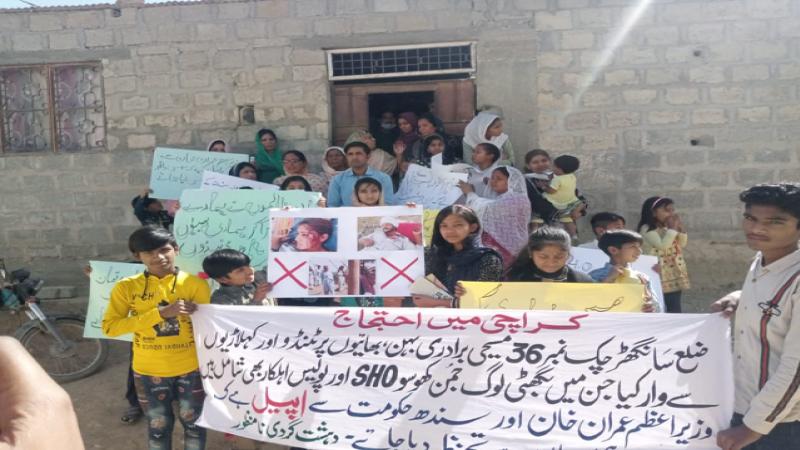 A Christian farmer, Azam Masih and his family living in the village of Tapa Chakrao, District Sanghar, Province Sindh, have been attacked and injured by an influential Muslim land grabber.
On February 26, 2021, Azam was at work when suddenly a Muslim mob of 25-30 from the Bugti tribe reached his residence asked his family to vacate the place. After passing this order they didn’t wait for a moment and attacked his family including his wife, son, and daughter with deadly weapons. The family was brutally beaten and suffered severe head injuries.
Senior Superintendent of Police (SSP) Mr Usman Ghani Siddiqui of Mangli police station took immediate notice and arrested those who were involved in the incident and provided justice to the family. Strict orders were issued to Mangli police as a result of which seven people accused of being involved in the incident were arrested. But the main two accused, Muza Ali Bugti and Darr Muhammad Bugti, and some others have not been arrested yet. Siddiqui also issued orders to Station House Officer (SHO) Muhammad Jaman Khoso Mangli to keep the environment peaceful.
An FIR (first information police report) was registered against the Bugti Baloch family and some unknown people at Mangli Police Station.
Azam’s nephew Dilmurad said that in 1997 his uncle bought 660 acres from retired colonel Ghula Ali.  The legal documents are in the custody of Azam and according to them 80 acres belong to the Catholic Church which was donated by Azam, whereas 580 acres are owned by Azam Masih.
In 2014, Anwar Sohan prepared fake property documents and sold them to Irfan Araiein in 2020. Irfan sold this land to the Bugti Baloch family. This land dispute is the subject of court proceedings and its court hearing was on 21 February 2021. The next hearing is due on 15 March 2021.
Azam requested the arrest of the main accused persons because they have made death threats. Azam also requested protection for his family and their property.