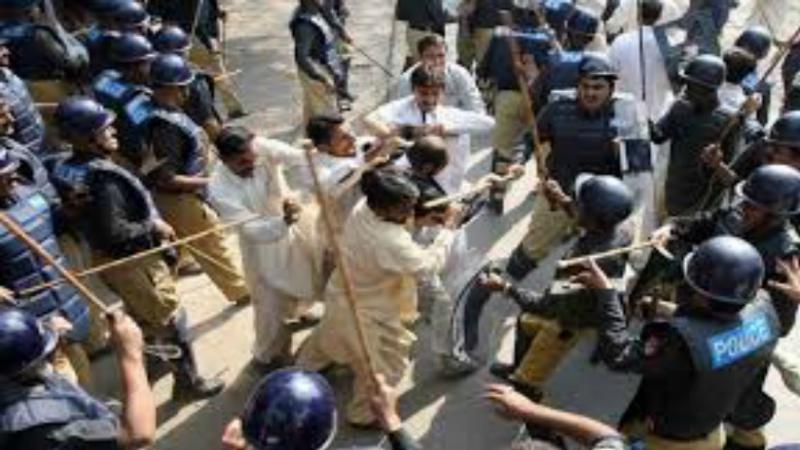 On January 25 officers from Taimuria Police Station, Karachi shot three innocent Christian boys,  Philip Stephen, 16, Sonoo Aslam,18, and Kamran Javed,13, all of whom had no allegations against them.
The friends were admitted to the Trauma Centre, Civil Hospital, Karachi in critical condition.
One of the victim’s mothers, Shamim Gill, told Pak Christian News (PCN) that the police shot seven bullets at her son’s legs and one of his legs had to be amputated.
Crying, she said that my son was the only breadwinner, she was worried as they lost the only income in the household. She is old and has no skills, so the family may have to starve from time to time, Shamim explained.
She requested the Chief Minister of Sindh Syed Murad Ali Shah and Imran Khan, Prime Minister of the Islamic Republic of Pakistan to take action against the rogue police officers and bring them to justice.
Sonoo’s sister said they were informed by the medical staff that he was severely injured and admitted to the hospital.
She added: “When we reached the hospital, my brother was in critical condition and doctors were asking us for our consent to amputate his leg. Upon asking they said there are no other options available, and if we want to save his life then we should give them our consent o start the procedure as soon as possible.
“Last night my brother went to have a meal with his friend when the police stopped them on the way and started asking questions. As soon as they came to know that they were Christian, they became harsh and one of the police officers snatched the cross from Sonnoo’s neck and threw it in the drain and asked him to bring it out. When he picked it up from the drain, they shot him in his legs and then took all of them to the Taimuria police station and asked them to run, then police immediately fired at them outside the police station and then sent them to the hospital in an ambulance.
She questioned: “Is it against the law to have tea with friends at night time in Pakistan, maybe it is for Christians but not for others.”
Kamran’s mum said: “The police shot at the belly of my son, his organs were hanging out of his stomach. According to the medical report his kidneys have been damaged, there may be some other internal damage too.”
Philip’s mum said: “I cannot understand why my son and his friends were shot while they have no criminal record, and at that time were not doing anything to be shot but their only crime was to be Christians.”
She further said they are all good and hardworking boys.
All three victims belong to very poor families and they’re the breadwinners for their families. They simply went out to spend some quality time together after a long workday, but instead, their lives were changed forever.
Their families are looking toward the high authorities for justice as the boys are still in critical conditions in the hospital.
We are also informed that to cover up the crime, the police have registered a false case against all three boys.